Doctor vs Engineer: Which One is Better in India? 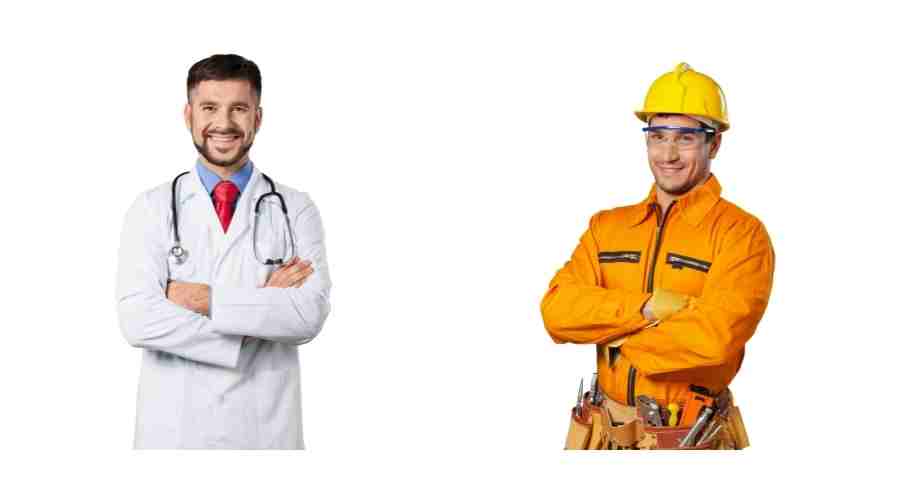 A question as basic to Indian parents as the chicken vs. egg debate: should my child choose medicine or engineering as a career path in the future? Of course, this is not an accurate representation of all Indian parents; many prefer that their children go into other streams such as commerce and arts.

And yet, medicine and engineering degrees have the highest amount of competition in the country and the largest exposure in the public eye. Moreover, with the advent of standardized tests such as JEE and NEET, the craze behind these two courses has gone further, with preparations beginning from as young as 6th grade.

There is often confusion among students who wish to take science on whether they should pick biology for medicine or computer science for engineering or choose math and biology to attempt both JEE and NEET. While the ultimate decision lies in the hands of the student based on their interest, it is always prudent to wonder which one is better in a country like India.

Both courses have their salient features, but certain aspects can be put up for comparison. So Doctor or Engineer which is better in India? Here is your answer:

Straight off the bat, one needs to address the very basic reason that people take up any career in the first place: the monetary benefit that comes out of it. The high assured salaries for doctors and engineers are also why there is a rat race for seats in such courses, compared to commerce and arts.

Different levels of salaries are offered at different levels of expertise and specialization to doctors. Interns make anywhere between 4,000 to 22,000 a month, depending on the state Government, while doing their MBBS degree of 5 years. House staff can make up to 36,000 a month in the private sector. While doing a postgraduate degree in medicine, such as MD, students can earn up to 75,000 a month, although it will be adjusted against the costs of the degree itself.

Established MBBS qualified doctors can make anywhere between 30,000 to 1,50,000 a month, depending on their skillset and popularity among patients. Doctors with higher qualifications, such as MD and DM, can reap higher benefits, starting with 3,00,000 per month. It is worth noting that these salaries have the potential to grow higher with experience.

Surgeons and Gynecologists can earn as much as 50,000 a day with surgeries and deliveries.

However, unlike in engineering, the institution one obtains their medical degree does not play a huge role in deciding one's salary. Doctors can establish a private practice in any area without hiring anyone.

In general, engineers sit for placements and get hired by companies on campus. Therefore, the starting package for engineers is likely to vary based on the college they studied. Recruiters classify engineering colleges into three tiers, namely:

Tier 1: Top IITs - salaries for entry-level jobs as high as 10-12 lakhs per annum

Tier 3: all other private institutions - an average of 3-5 lakhs per annum

However, these are just average figures that do not represent the tiers accurately, especially tier 3—many instances of students from regional colleges securing high packages right after completing B.Tech. For example, Arya College of Jaipur is a tier 3 college that sees an average package of 6-8 lakhs. However, the computer science engineering department's highest ever secured package is a whopping 18.6 lakhs. Hence the skills of an individual also play an important role.

Medicine seems to offer higher salaries, and it requires more investment in terms of college education than engineering.

The other reason many parents want their kids to go into medicine or engineering is the supposed job security assigned to these jobs.

Job security in engineering might not be obvious. Still, it does exist because there is always demand for engineers in the Government to facilitate the provision of public utilities, from electricity to dams. In India, engineers are also protected under the new labor code of 2020, as most engineers work as employees in companies, while most doctors serve as professionals.

However, job security for engineering in India has been on the decline, as there are many engineering graduates with only a few positions to fill. As a result, engineers constitute a significant proportion of the total unemployed people in the country.

Technological improvements are known to render certain objects obsolete and put an end to careers associated with them. For example, the advent of the smartphone led to the end of Telegram and all jobs based on it.

With increasing automation, machines are slowly taking over jobs such as Accountants, Cashiers, Waiters, etc. Something similar is likely to happen to doctors or engineers.

Advanced medicines rely heavily on technology for new machinery and tools. However, through biotechnology, innovations are being constantly made to improve patients' lives and reduce their suffering.

Artificial Intelligence is now used to constantly monitor the vitals of a patient, which can perform a better job than doctors or nurses in detecting threats and reporting them in real-time.

However, the chances of AI replacing doctors are highly unlikely, even in the next 100 years. This is because this field deals with life and death. People will be hesitant and resistant to trust a machine to perform a surgery or even a diagnosis on them.

For many, going to a hospital in itself is a scary process, and they would never agree to any medical procedure without the presence of a human expert. Moreover, it is very difficult for AI to mimic expert doctors, as medicine is not a job of monotony.

While other fields rely on technology to enhance their work, engineers are the ones who create technology in the first place. As a result, entry-level jobs in certain engineering streams might be threatened by AI, such as ones that involve iterative work or testing alternative options, etc.

However, engineering expertise cannot be replicated by AI completely, as engineering is a job that involves a high practical application of knowledge for decision making.

Moreover, if AI does indeed replace engineers with continuous machine learning, it will only be a situation of "When God closes a door, he opens a window." There will still be a need for engineers to develop AI and enable machine learning. New jobs will keep emerging in the engineering field as technology replaces old ones

4. Saturation in the Market

In a country like India with huge unemployment, many careers are becoming saturated in the market, either going out of trend or facing extremely high competition.

InMedicinee, students pursuing and completing MBBS have risen exponentially in the past few decades. Skilled and semi-skilled doctors can, however, easily make it big. Moreover, the country has a huge population with not enough medical facilities. Therefore, more doctors are always seen as a welcome addition, especially in remote and rural areas.

The number of doctors completing postgraduate education is relatively low, and the market for such qualified professionals is not saturated in India.

In comparison, the craze with IITs and NITs has led to many students attempting JEE and then getting into engineering colleges. The number of B.Tech. Graduates are disproportionately high compared to the number of jobs available. Studies have revealed that 48% of Indian engineers are unemployed.

However, the flexibility that engineering brings in a career outweighs the fear of unemployment. As a result, many engineers choose to pursue MBA for post graduation. This career development does not come with medicines, as studying MBBS inadvertently pushes one to become a doctor.

Both MBBS and B.Tech. Degrees have high worldwide recognition. Developed countries such as the USA, Canada, the UK, Australia, and New Zealand acknowledge MBBS as a valid medical degree for practice, provided a licensing exam is given. In addition, certain countries in Africa and Asia accept Indian MBBS and grant them the right to practice directly.

Initially, only engineering degrees from IITs had international recognition. However, at present, countries such as the USA, Japan, Korea, and Australia have recognized B.Tech degrees from Tier 2 and Tier 3 colleges.